money testing
Think and Grow Rich
This book was first published during the Great Depression. It has sold more than 15 million copies.
By Edward Razzell · July 9, 2020 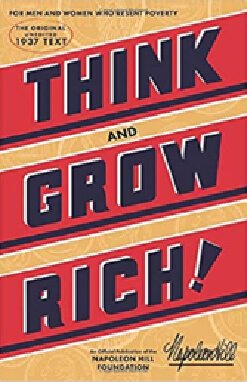 This book was first published during the Great Depression. It has sold more than 15 million copies. Oliver Napoleon Hill (born October 26, 1883 – November 8, 1970) was an American self-help author.

This book has obviously been well received by millions of people around the world. Many people relate their success in life to having read this book. For those on the journey to life success and fulfillment, this book is often considered a must read.

Og Mandino (The Greatest Salesman in the World) is one who has talked of its influence in his life – “During the past twenty-five years I have been blessed with more good fortune than any individual deserves but I shudder to think where I’d be today, or what I’d be doing if I had not been exposed to Napoleon Hill’s philosophy. It changed my life.”

Through the eyes of another “this is the best single book on personal success ever written; it made me a millionaire starting from nothing” Brian Tracy, New York Times Bestselling Author.

For Daymond John, Founder and CEO of FUBU apparel and Co-Star of ABC TV’s Shark Tank, “I read it every two or three years to keep my drive going”.

The essential theme of this book is that success in life can be strongly associated to the positive power of the human mind. Daily, we all struggle with our own inner voices telling us that we are not good enough, we will not make it, the path ahead is too risky etc….

So, we need to adopt a previously proven approach, centered around a methodology which provides us a way forward. This comprises a ‘mental’ tool kit to help us stay centered with thoughts on growth, our vision of success and ultimately wealth in our own lives. ‘Wealth’ can apply to our financial situation but equally apply to our work, relationships, health and in any ways in which our lives can be enriched.

Napoleon Hill studied the habits of more than 500 men of great wealth and drew some 16 “laws” to be applied to achieve success. Think and Grow Rich condenses them, providing the reader with 13 principles in the form of a “Philosophy of Achievement”.

The book asserts that we can achieve great heights if we can successfully suppress negative thoughts, focus on long-term goals and deliver on our personal objectives. Thus, if we learn and live the principles laid by Napoleon, the chances of success in our own lives are greatly increased.

From my experience, you may struggle to absorb any deep learnings from this book until you have read it at least a couple of times. After each reading, you will have a better handle on the underlying theme and at least one item from the reading will strongly resonate with you.

The thirteen(13) “Principles” with some supporting text excerpts, follow below:

Desire (THE STARTING POINT OF ALL ACHIEVEMENT)

Faith (VISUALIZATION OF, AND BELIEF IN ATTAINMENT OF DESIRE)

Autosuggestion (THE MEDIUM FOR INFLUENCING THE SUBCONSCIOUS MIND)

Imagination (THE WORKSHOP OF THE MIND)

Organized Planning (THE CRYSTALLIZATION OF DESIRE INTO ACTION)

Decision (THE MASTERY OF PROCRASTINATION)

Power of the Master Mind (THE DRIVING FORCE)

The Mystery of Sex Transmutation

The Subconscious Mind (THE CONNECTING LINK)

The Brain (A BROADCASTING AND RECEIVING STATION FOR THOUGHT)

The Sixth Sense (THE DOOR TO THE TEMPLE OF WISDOM)

Perhaps the primary intent of the book is best summed up in the words of Napoleon Hill himself when he wrote that “There is a difference between WISHING for a thing and being READY to receive it. No one is ready for a thing, until he believes he can acquire it. The state of mind must be BELIEF, not mere hope or wish. Open-mindedness is essential for belief. Closed minds do not inspire faith, courage, and belief…”. And furthermore, “A purpose to which I have faithfully devoted over a quarter of a century—is to present to all who want the knowledge, the most dependable philosophy through which individuals may accumulate riches in whatever amounts they desire”.